(c) image Kirill Kukhmar/TASS - the image may not be reused or copied.
(c) text Sasha Shestakova - the work may be cited according to academic standards. This work may be copied and redistributed for non-commercial, educational purposes, if permission is granted by the author.

Interdisciplinary doctoral researcher Sasha Shestakova examines the intersections of climate change, extractivist capitalism and the destruction of indigenous cultures. Drawing on Françoise Vergès’ concept of the racial capitalocene, they trace the consequences of an oil spill and other environmental damage in Russia’s Far North on the lifeworlds of indigenous peoples. The text offers a planetary perspective, as well as querying the binary divides of human/nature and Global North/South. This contribution was shaped by discussions that emerged during the First Graduate Workshop of the Graduate School for East and Southeast European Studies, Unbuilding Binaries: Exploring affective and analytical responses to binary divisions as encountered in the field, in November 2020. The event was supported by the Leibniz ScienceCampus “Europe and America”. An overview of the Workshop can be found here on Frictions. Vita Zelenska, co-organizer of the workshop and co-author of that report, served as conceptual editor of this article and the text for Frictions by Selbi Durdiyeva. 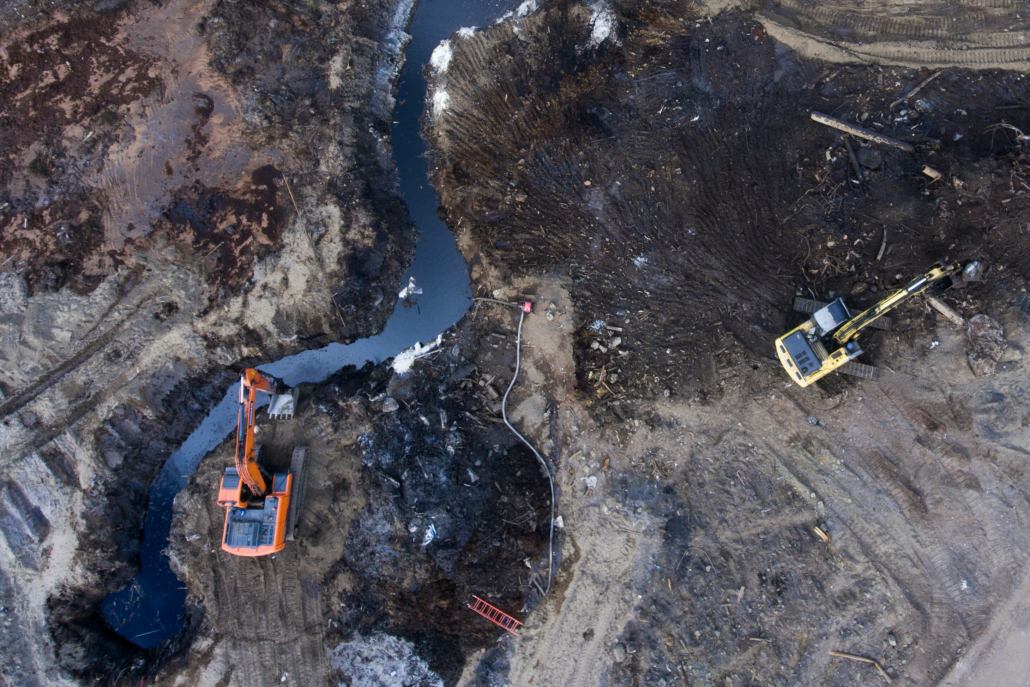 On May 29, 2020, forty-four tons of diesel oil spilled in the Taimyr Peninsula in the Far North of Russia. It contributed to long-lasting ecological damage that is manifested in multiple micro-spills as well as the slow destruction of soil and water caused by the process of extraction of mineral resources. One tanker delivering fuel to the Norilsk-Taimyr Thermal Power Station capsized, spilling the diesel oil it was carrying. The disaster was a result of climate change: the constructions containing the oil reserves could no longer hold their weight because the soil had become unstable owing to permafrost thawing.

Climate change is in turn a consequence of the Anthropocene – a term coined by Paul Crutzen to describe the last 2000 years of human-made influence on and alteration of the Earth’s natural processes. Several researchers have emphasised the contingent conditions of class, gender and race that shape differentiated experiences of the Anthropocene, questioning the universality of this category, while Françoise Vergès has used the term “Racial Capitalocene” to describe how the ongoing destruction of the environment is done in the name of capitalist processes of exploitation and accumulation.[1] As the head of Norilsk regional Nganasan commune Valeria Boglova points out, this disaster has led to the destruction of soil and water, making it impossible to fish or to herd deer, thus leading in the long-term destruction of indigenous lifeworlds.[2] Lifestyles, languages, and cultures are becoming extinct precisely due to the environmental destruction that is sustained by the corporations and the state.

The debate concerning the “Racial Capitalocene” mostly revolves around the “south of the global north”[3], meaning that it mostly reflects on colonial violence performed by European and North American countries. This is symptomatic of the “western preoccupation with itself”[4], hence the calls – including mine here – for resituating the conversation towards colonialism in the “second world”, a debate which does not fit into the clear distinction between the “rich first world” and the “poor third world”[5]. I claim that the conversations around the Racial Capitalocene are particularly relevant to Russia as they reveal that the destruction of soil and water, caused by mining as well as the transportation of mineral resources, is tied to the destruction of the indigenous lifeworlds, which causes harm on an intergenerational scale.

The Taimyr diesel spill is one of the myriad forms of ecological violence happening in North-Eastern Siberia where oil spills have become business as usual.[6]  The environmental disasters occurring in the Taimyr Peninsula expose the position of Russia as a “Janus faced Empire”[7] within relations of coloniality: while being a second-rate and resource-dependent empire, Russia performs racialized colonial violence in an attempt to “outwest the west”.[8] Racialization is a process of dehumanization, which emerges from the operation of legislation as well as the resource-driven approach to land. For instance, the expansion of mining territories prevents indigenous people from even entering some territories where they used to herd deer.[9]

The head of the Yakutia Dolgan community Vyacheslav Shadrin puts the Taimyr oil spill in a wider context. He points out that the thawing of the permafrost will ease access to mineral resources, thus further threatening indigenous land-rights. He notes:

Infrastructure built for industrial projects — roads, power lines — and the noise associated with the construction has a major impact on the environment. The situation is aggravated by the deterioration of the environment. As representatives of Indigenous peoples believe, environmental destruction is the most significant challenge presented by climate change. One of the northern elders said: “We have been living here for thousands of years. Many things change, but our ancestors always found a way out of the situation. Nevertheless, we cannot survive if we do not have our land.[10]

Shadrin’s point reveals that the ongoing process of environmental destruction is bound to the overall creation of an unliveable environment. Both in Yakutia and on the Taimyr Peninsula, racialization is a dehumanizing process involving the othering indigenous people, which is tightly interwoven with the destruction of the land.

The interwoven environmental and social destruction can be described using the concept of “weathering” proposed by Astrid Neimanis and Jennifer Mae Hamilton. As they put it, “in a climate-changing world, climatological phenomena are themselves imbricated in these embodied lifeworlds.”[11] Neimanis and Hamilton show that weather is not “ahistorical”[12]; rather, it is tied to the histories of natural-cultural extraction and control. In the case of Taimyr Peninsula, “weathering” reveals the multi-layered colonial violence, embedded in the seemingly universal issue of the climate change. It also reveals the need to position the destruction of groundwater and lifeworlds within longer colonial histories.

The history of Russian colonialism can be described in terms of settler colonialism. Eve Tuck and K. Wayne Yang define settler colonialism as the combination of “all things Native becoming resources” and “the biopolitical and geopolitical management of people, land, flora and fauna within the ‘domestic’ borders of the imperial nation”.[13] Russian colonialism combined both of these traits. Alexander Morrison marks the beginning of Russian settler colonialism with the establishment of the “resettlement administration” within the Ministry of Internal Affairs in 1896, which started the “systematic, technocratic, state-driven” colonial policy[14]. The current environmental and social conditions are informed by the “total climate”[15] of settler colonial violence, which combines pollution of the Arctic Ocean and tundra rivers, deforestation (with the damage to woodland being comparable in size to that resulting from Amazon forest fires), the melting of permafrost caused by human-induced global warming, and anti-indigenous oppression.

The analyses of the racialized destruction of soil and water in the Russian context introduces another actor to the conversation, namely the state. In Russia, the modus operandi of oil spills is sustained by police measures, including labelling the local ecological organizations as “foreign agents”[16] or simply banning them. Another legislative example of the toxic alliance between the state and capital is the recent “Arctic Development Strategy” which, according to the indigenous activist and coordinator of the Rivers without Borders Alliance Eugeny Smirnov, targets everyone who might disrupt Russia’s extractive interests in the region.[17]

Paying close attention to the anti-indigenous violence performed by both capital and the state complicates the human-nature binary that facilitates anthropogenic destruction. The process of unlearning the binary between the human and nature entails questioning who historically has been counted as human within both scientific and legislative frameworks. As Susan Shuppli pointed out in a presentation during the Arctic Art Forum[18], indigenous voices as well as frames of accountability are still almost absent from both legislation and science. Indigenous people are therefore often rendered non-human within the existing modes of knowledge production. Thus, to unlearn the binary between human and nature, it is necessary first to question the racialized dynamics of dehumanization, allowing for the perception of land as “empty” and thus available for destruction.

However, the perception of indigenous people solely as the victims of settler colonial violence reproduces a one-dimensional perspective that is unable to see beyond white experiences. It is crucial to pay attention to the examples of indigenous resistance in the here and now. The form of alliances between natives and non-natives, which resists settler colonialism on the same side as indigenous people or in historically white spaces, was described by the Indigenous Action organization as the work of “accomplices”.[19]

A recent example of such engagement by accomplices occurred in Sakhalin. An alliance between the local activist organization Sakhalin Environmental Watch and the indigenous Uylita community, living in the village of Val[20], won a court case by using the existing laws to secure a ban on building an oil-product dumping site. Due to the current political situation in Russia, the prospective of advocating for the introduction of the laws to include indigenous rights seems quite unlikely. Nevertheless, the case in Sakhalin reveals the possibility of change in the here and now through the laborious work of repurposing the existing legislative infrastructure for the needs of indigenous resistance. It also suggests a direction for other accomplice work under conditions of ongoing settler colonial violence: unbuilding the settler colonial structures for the decolonial futures to come.

[2] Myznikova Viktoria. It Hi bin do Chukotka. Kak zhivet Arktika. [From Hibins to Chukotka. How does the Arctic live]/ Ecosphere. September, 16. 2020 https://ecosphere.press/2020/09/16/ot-hibin-do-chukotki-kak-zhivet-arktika/

[15] Christina Sharpe. 2016. In the Wake: On Blackness and Being. London: Duke University Press.

(c) image Kirill Kukhmar/TASS - the image may not be reused or copied.
(c) text Sasha Shestakova - the work may be cited according to academic standards. This work may be copied and redistributed for non-commercial, educational purposes, if permission is granted by the author.

Sasha Shestakova is an interdisciplinary researcher whose primary interests include a decolonial perspective on art, non-western perceptions of time and space, art in heterogenous post-soviet space, and the politics of infrastructures. They graduated MA in Contemporary Art Theory at the Goldsmiths University of London. They are currently working on Ph.D. at the Ruhr University Bochum, supervised by Prof. Henriette Gunkel. In their Ph.D. project, they use the museum collections to interrogate the temporal relations of Russia’s settler colonialism. They are interested in the way museums located in the imperial center contribute to the temporal conquest on an infrastructural level. Twitter: https://twitter.com/DccSasha