The English translation is by Paul Vickers (Leibniz ScienceCampus Regensburg) 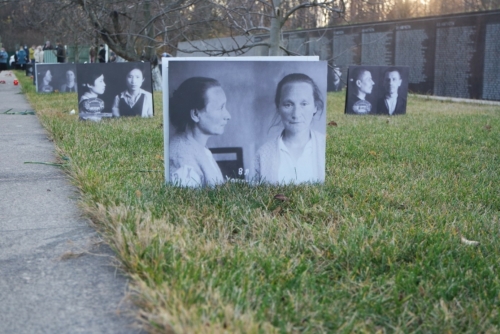 This photo essay features photographs by Melanie Hussinger, with accompanying texts from her and her colleague Hajo Raupach. In October 2021 they travelled to Moscow to witness participatory commemorative practices on the Remembrance Day of the Victims of Political Repression. This was a time when the city was not only under pandemic-related restrictions, but when civil society activists and institutions were facing increasingly strict controls that since the start of the war of aggression against Ukraine have resulted in the closure of Memorial and even more intense unwillingness to countenance narratives and practices that undermine state-sanctioned memory.

In the essay, they explore the efforts to commemorate victims of the Great Terror of the late 1930s. Hussinger and Raupach explore the variety of participatory remembrance practices, from family memory to civil society endeavours, and how where they fit in Moscow’s urban and mnemonic landscape.

Melanie Hussinger won an award in the inaugural Regensburg Area Studies Master’s Prize in 2020 for her study “Ein Name, ein Leben, ein Zeichen. Historisches Gedenken im zivilgesellschaftlichen Projekt Poslednij Adres“ (One Name, One Life, One Symbol. Historical memory in the civil society project Poslednij Adres). That project is central to this essay alongside the work of 2022 joint winner of the Nobel Peace Prize, Memorial.

The original version of this essay was written in German. An English translation is presented alongside that text here.

Another blog post in Frictions that considers the Butovo firing range discussed here is by Selbi Durdayeva, Theorizing binaries through auto-ethnography, method, and commoning: Reflections from the field

In 2020/21, for the first time in eight years, the German Year took place in Russia. This transnational event, coordinated by the Goethe-Institut in Moscow, the German Chamber of Commerce Abroad (AHK) in Moscow, and the German Embassy in Moscow, sought to contribute to the intensification of German-Russian relations. As part of the German Year, we were able to carry out a collaborative international project on participatory remembrance of the totalitarian past in Germany and Russia. While the Covid-19 was lockdown ongoing in Russia, we travelled to Moscow to take part in and observe various events relating to the Day of Remembrance of the Victims of Political Repressions, which is marked on 30 October each year.

In our case, the focus was on two participatory memory endeavours: the German Stolperstein (Stumbling block) initiative and the Poslednij Adres (Last known address) project. In two virtual workshops, the voices of the curators of both projects were presented, creating connections and cross-references, while at the same time revealing the limits of comparing two very different cultures of remembrance. They left behind a clear impression that what is absolutely necessary is to get first-hand experience of participatory commemorative practices. In the course of our journey, we enquired into what forms of commemoration of mass terror, deportations, and the execution of hundreds of thousands of innocent people would be possible within the framework of the official Remembrance Day of the Victims of Political Repression in October 2021.

The photographs presented here were taken during the trip and offer insight into Moscow as it was before the war of aggression against Ukraine and the forced closure of the NGO Memorial. It shows that memory of the Great Terror, on the one hand, is shaped by cooperation between various actors and groups, while on the other hand it constitutes a highly contested field. What role Stalinist-era repressions play in today’s Russia remains open. That the Russian population has not been able to achieve closure in relation to these events becomes evident in the places that we documented.

Participatory Remembrance of the Victims of State Terror in Germany and Russia was based at the Leibniz Institute for East and Southeast European Studies (IOS) in Regensburg, where it was led by Prof. Dr. Guido Hausmann. It was conducted in cooperation with Prof. Dr. Jörn Happel, professor of Eastern and East-Central European History at the Helmut Schmidt University, Hamburg, and the Young DGO (German Association for East European Studies) in Erlangen-Nuremberg. The initiative was funded by the Goethe-Institut in Moscow and IOS. Melanie Hussinger was employed at IOS to develop the project and is now at the HSU in Hamburg together with Hajo Raupach.

Away from the hustle and bustle of the capital, in the far western outskirts of Moscow, there are traces of crimes committed during the Soviet era. While memory of the terror victims is hardly evident in the city centre, here at the murder scene it takes on a highly individualized and personal form. 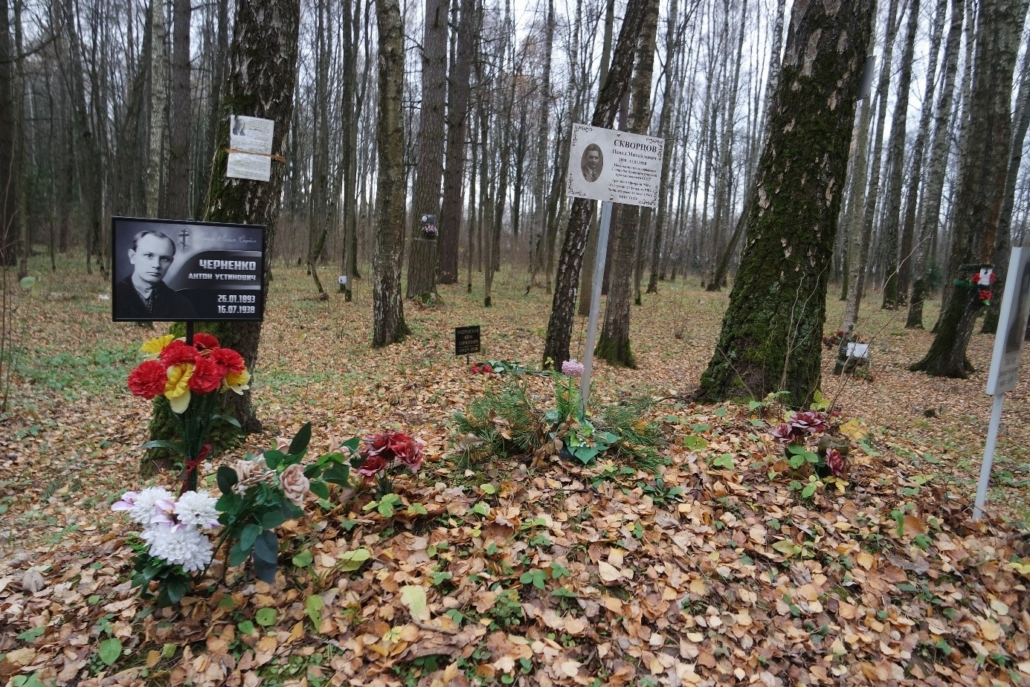 Away from the hustle and bustle of the capital, in the far western outskirts of Moscow, there are traces of crimes committed during the Soviet era. While memory of the terror victims is hardly evident in the city centre, here at the murder scene it takes on a highly individualized and personal form. It is a place of mass shootings, where tens of thousands, if not more, Muscovites were killed in the Great Terror of the 1930s. Handmade memorial plaques, decorative flowers and photos mark the site. The symbols of remembrance placed by relatives and descendants seem to be distributed randomly throughout the forest. Memory is highly present at this site, becoming particularly vibrant at the end of October each year, around the time of the Day of Remembrance for Victims of Political Repressions. 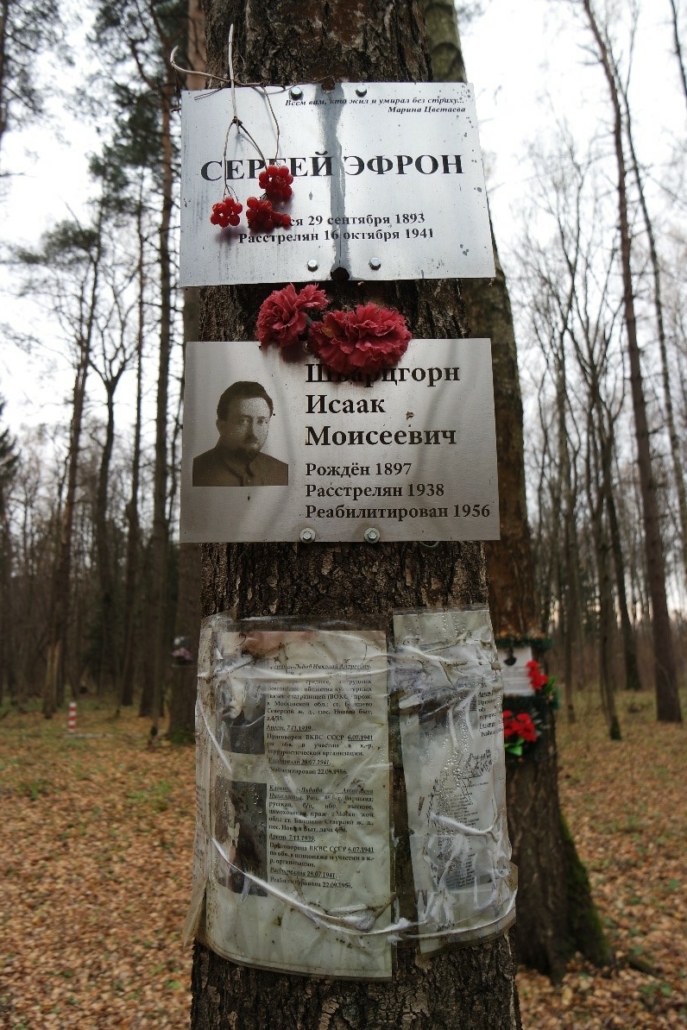 The descendants of the dead bring flowers, small signs, and copies of documents testifying to the rehabilitation of those killed, as a way of commemorating those murdered. Being arrested during the Stalinist-era terror endangered family members and friends. Photos of those persecuted were often removed from family albums, while people avoided speaking about those who had disappeared. Relatives prove that their ancestors died here by attaching signs containing biographical data. The diversity of those commemorating their ancestors is evident in the variety of material forms manifesting memory. While some leave highly polished stainless steel signs, others bear witness through pieces of paper in covered in plastic that are then provisionally bound with packing tape. Yet, the memory on display seems to be the same. 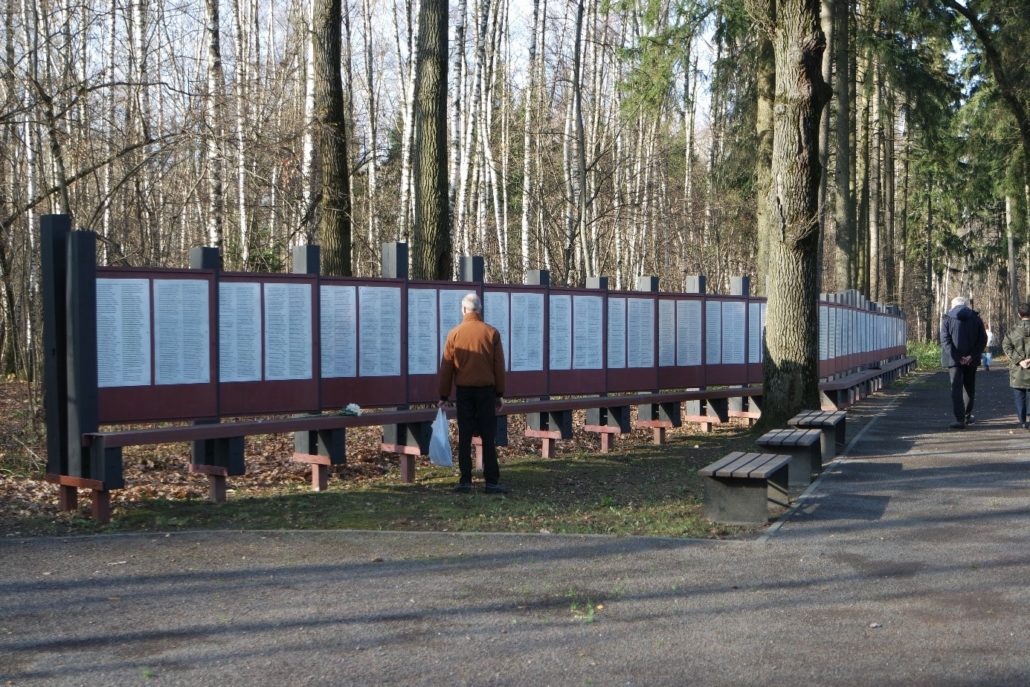 The civil society organization Memorial, founded in the 1980s, was a joint winner of the Nobel Peace Prize in 2022. It promotes the commemoration of the Soviet terror in Russia. The People’s Commissariat for Internal Affairs (NKVD) was primarily responsible for carrying out the terror in the 1930s. Memorial erected boards at the NKVD firing range, the site of execution, at Kommunarka bearing the names of those murdered, forming the Wall of Remembrance. Beneath the memorial boards is a ledge where visitors can lay flowers in memory of the victims. This site, however, reveals a central dilemma of Russian memory. One of the names on the commemorative plaques is Genrikh Yagoda. He was chief of the NKVD until his arrest in 1937. He was subsequently executed at the height of the Great Terror in 1938. Who, then, are the commemorative decorations for? Relatives, after all, tend to favour simpler conceptions of victims and perpetrators. 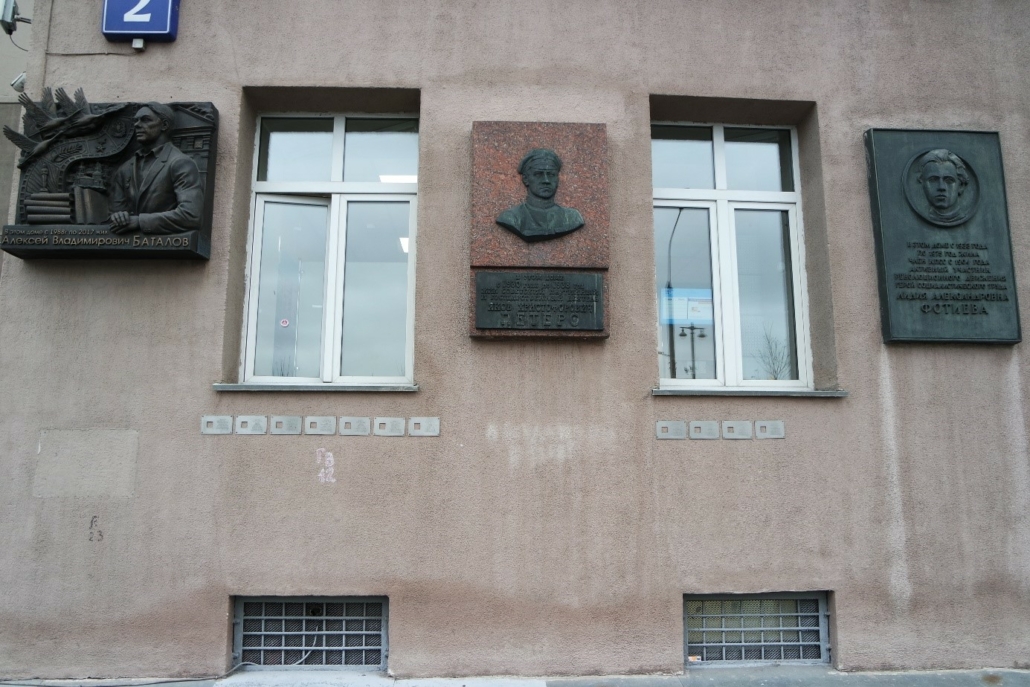 Since 2014, the civil society project Poslednij Adres has memorialized victims of Soviet-era repression in Russian cities, towns and villages. The Moscow House on the Embankment (Dom na Naberezhnoy) is perhaps the building that is most synonymous with the history of terror faced by Soviet elites. Here, though, Poslednij Adres with its modest metal signs breaks with the stylistic tradition of individual marble busts and memorial plaques for renowned Soviet-era figures whose lives often ended here. Beyond the break with the traditional commemorative style, however, the signs also shift the focus directly onto the experiences of repression faced by the former inhabitants of the house.

As a result of the Bolsheviks’ atheistic attitudes, Stalinist-era repressions also had representatives of the Orthodox Church is their sights. The Butovo Cross was erected in 2007 and commemorates members of the clergy who were purged in the Great Terror of 1937 and 1938. Following the collapse of the Soviet Union and the reunification of the Russian Orthodox Church with its branches around the world, many of the persecuted believers were canonized. The Butovo Firing Range is where many of those recognized as martyrs today were murdered. Today, it is a memorial site connected to the church. Various strands commemorating the mechanisms of repression come together as the wooden cross is from the Solovetsky Islands in the White Sea, where a Soviet “re-education” camp was created under Lenin. It was, in fact, a death camp. 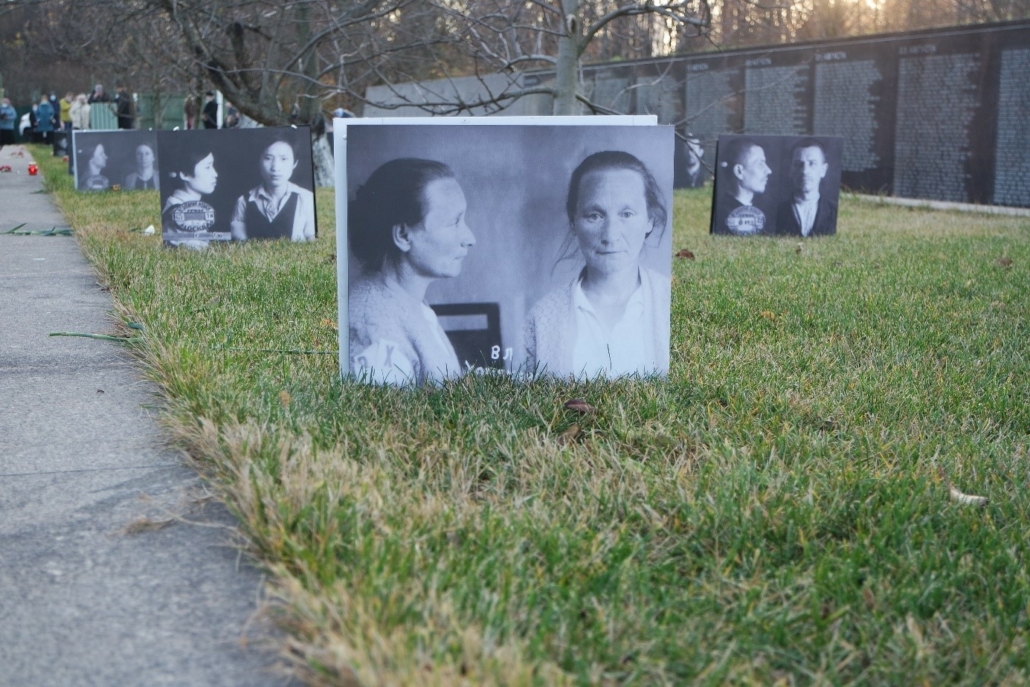 On 30 October, the official day for commemorating political prisoners in Russia, photographs taken from KNVD investigation files are put on display at the Butovo Firing Range. Led by a priest, relatives and participants recite the names of those executed all day long. This action, named Reclaiming the Names, can be traced back to the Memorial NGO. It offers a platform for continuing the performative practices of representatives of the Orthodox Church while encouraging broader social involvement. While Memorial was banned in 2021 from organizing public commemorative activities around the Remembrance Day for victims of political oppression on the pretext of pandemic-related measures, the Church event could still take place. 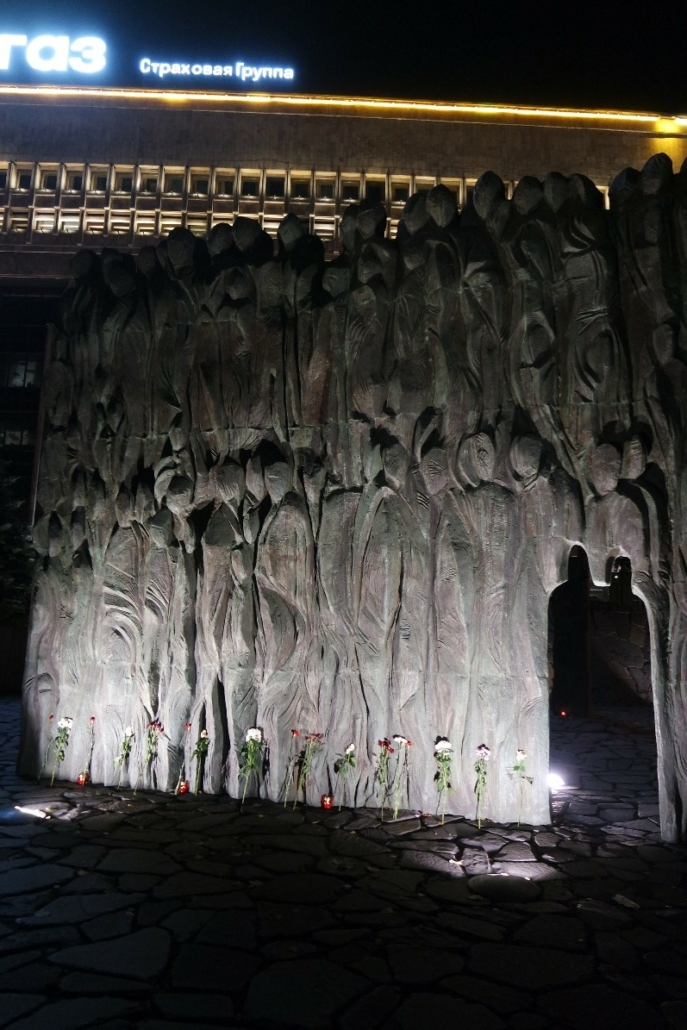 This Wall of Commemoration was unveiled by the President of the Russian Federation, Vladimir Putin, in 2017 on the occasion of the Remembrance Day. In 2021, this official GULAG memorial is also decorated with many flowers and wreaths. The ribbons bear inscriptions revealing that many were laid by ministries and municipal organizations. This is where the Russian state commemorates victims of Stalinism. Through this monumental site in the centre of Moscow, the government seeks to give form to and thus control commemoration of the Great Terror. The tendency towards appropriating successful civil society projects, such as the Perm-36 Gulag Museum or the Immortal Regiment, and ascribing state-sanctioned meaning to them has increased in recent years. 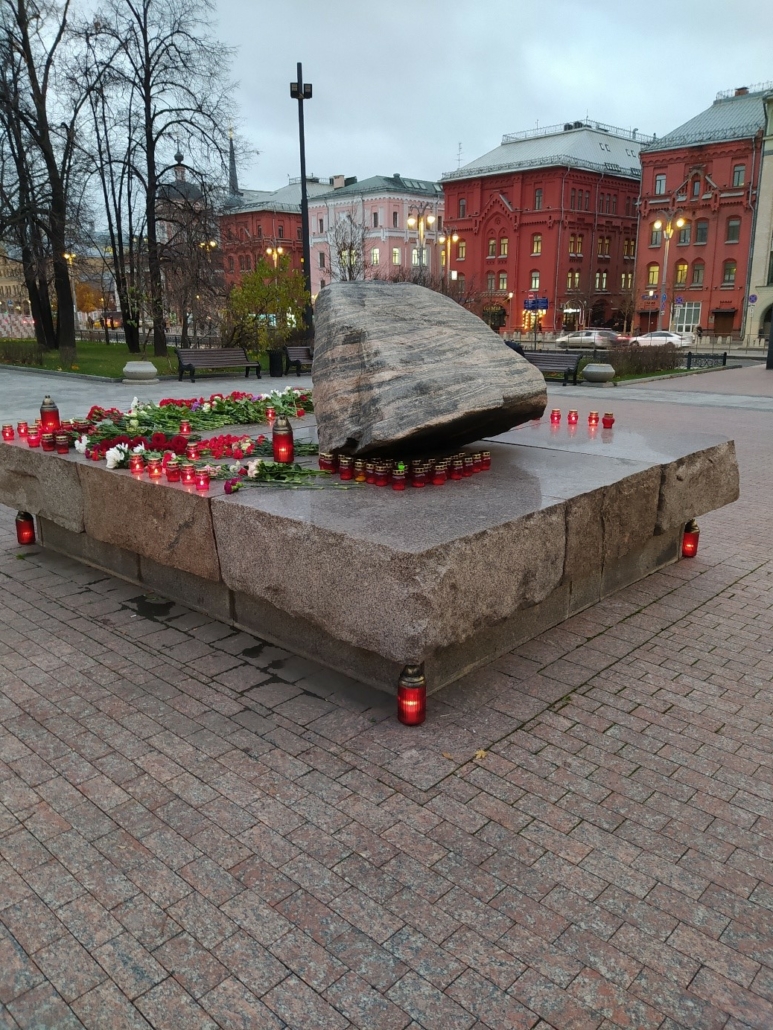 The Solovki Stone is perhaps the most symbolic memorial site in Moscow relating to the victims of Stalinism. In the early 1990s, Memorial activists brought a boulder from the Solovetsky Islands to Moscow, turning it into a memorial stone marking the original location of the Terror: the Lubyanka, headquarters of the Soviet and now Russian security service. While this photo might not show who has left flowers and candles for the victims of repression, it should be noted that they did so under observation by numerous armed police. In late 2021, this site, a place of civil society-led commemoration, acquired a further connotation as Memorial’s umbrella organization was ordered to close by a Russian court. This stone, then, reveals how the diversity of actors involved in memory practices can flow together in one place.

The forms of memory that we encountered in Moscow were heterogeneous and vibrant. Now, more than one year on from our visit, Russia is engaged in a war of aggression against Ukraine. Political repression within Russia today have led to the official liquidation of Memorial, rendering it incapable of conducting public memory work. The leaders of the Russian Orthodox Church support the government’s war. It is to be expected that commemoration of the Great Terror in Russia will increasingly fall under the auspices of the Church. Thus, its representatives will come to dominate the interpretation of the memory of this period. On the other hand, participatory commemorative initiatives such as Poslednij Adres continue to practice memory from below, despite the increasingly difficult conditions. The memory of what happened in the Soviet Great Terror of the 1930s thus remains an issue for all of Russian society.