images and text (c) Jana Stöxen - the work may be cited according to academic standards. The text and images may be copied and redistributed for non-commercial, educational purposes, if permission is granted by the author.

Post-socialism in Passing: Impressions from field research conducted off the beaten track 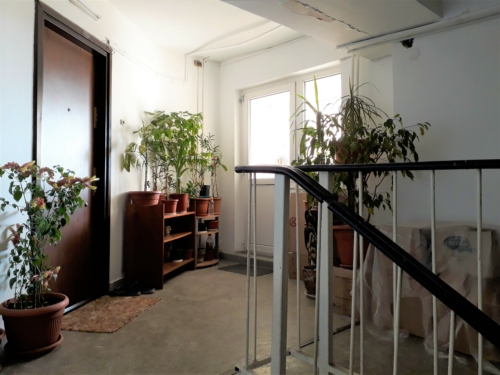 Jana Stöxen, winner of the inaugural Regensburg Prize for Prize for Outstanding Master’s Theses, presents a photo essay based on her ethnographic field research conducted in Bucharest. She traced the ways post-socialism forms part of everyday life, shaping the community in a block of flats in the Berceni district of the Romanian capital.

The texts accompanying the images and outlining her research are presented in English and German.

In a companion piece presented in Frictions, Jana Stöxen offers some reflections on doing interdisciplinary research and how to cope with the fears and difficulties of what comes after a Master’s degree.

The photographs presented here capture the Berceni district of Bucharest. I took them in January and February 2020 as part of research towards my master’s thesis, Transformation im Treppenhaus? Soziales Gefüge im semi-öffentlichen Raum eines Bukarester Plattenbaus zwischen materiellem und ideellem Erbe des rumänischen Sozialismus (Transformation in the Stairwell? Social fabric in the semi-public space of a Bucharest housing estate between the material and ideological legacies of Romanian socialism).

I have deliberately avoided including images depicting the centre of Bucharest and other districts of the city, even though I also explored them. My aim here is to direct attention to this particular residential district, one rarely visited by tourists. The photographs were initially a side product of my research, documenting my trip, but ultimately they came to serve as sources in my project.

Some of the images show the inner workings of my field study: the semi-public spaces of a ten-storey housing block, including the stairwell and entrance area. The photographs were taken during the course of observations and conversations conducted in the building, emerging almost in passing. Other shots, most of which were taken during expeditions through the district, offer an illustration of the surroundings of the blocks and the broader neighbourhood of the housing estate. I visited mainly during the early morning or later in the evening, as well as at weekends, covering the area on foot. In doing so, I developed a sense of the structures of everyday life in the district: a space that emerged from the drawing board of socialist-era construction projects and subsequently supplemented by the Eigensinn of the private sector. Therefore I incorporate into my analytical perspective on Berceni a wide range of perspectives on this urban landscape of housing blocks: views that reveal how, in a way, it resembles a mountain range; the attempts to make the inhospitable hallways close to the entrance doors more homely; messages from neighbours; depictions of the willingness, or perhaps need, to improvise; and somewhat incongruous advertising.

The urbanization of South Bucharest intensified from the 1960s. Large-scale housing areas are testament to a socialist-era building boom. Fuelled by the planned economy and consistent population growth in the Romanian capital, this compulsion to build lasted until the final days of the regime. The slides at the open-air swimming pool in the winter landscape of Parcul Tineretului, together with the extensive surrounding green spaces, make you forget for a moment that behind the greenery everyday life in the concrete blocks begins again. 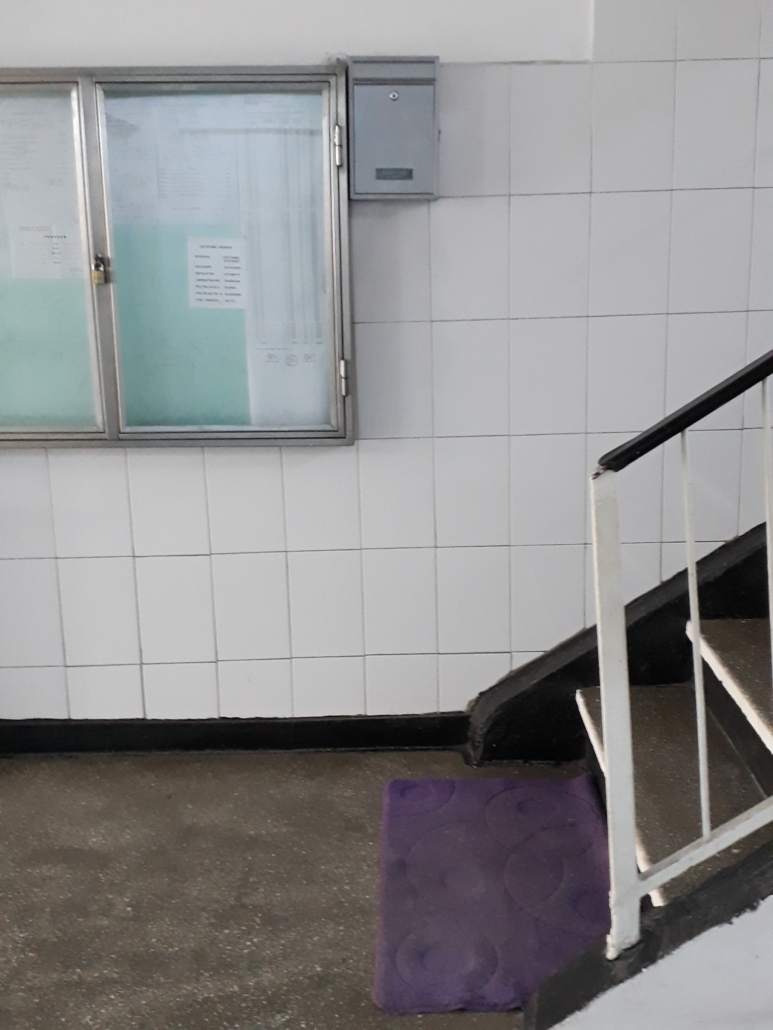 The caretaker – a figure possessing great respect and an even more substantial set of rules and regulations – is in this case an older man with a grey moustache and beaming smile. He seems to be well liked, with the residents describing him as upstanding and hardworking. I am fortunate that he took an interest in my project and – with a cigarette permanently between his lips – was happy to share information. His primary means of communicating with the residents is this noticeboard in the glass cabinet at the bottom of the stairs. He displays the monthly bills and other notices there. His additional insignia are a mobile phone and a master key – the caretaker’s privilege. 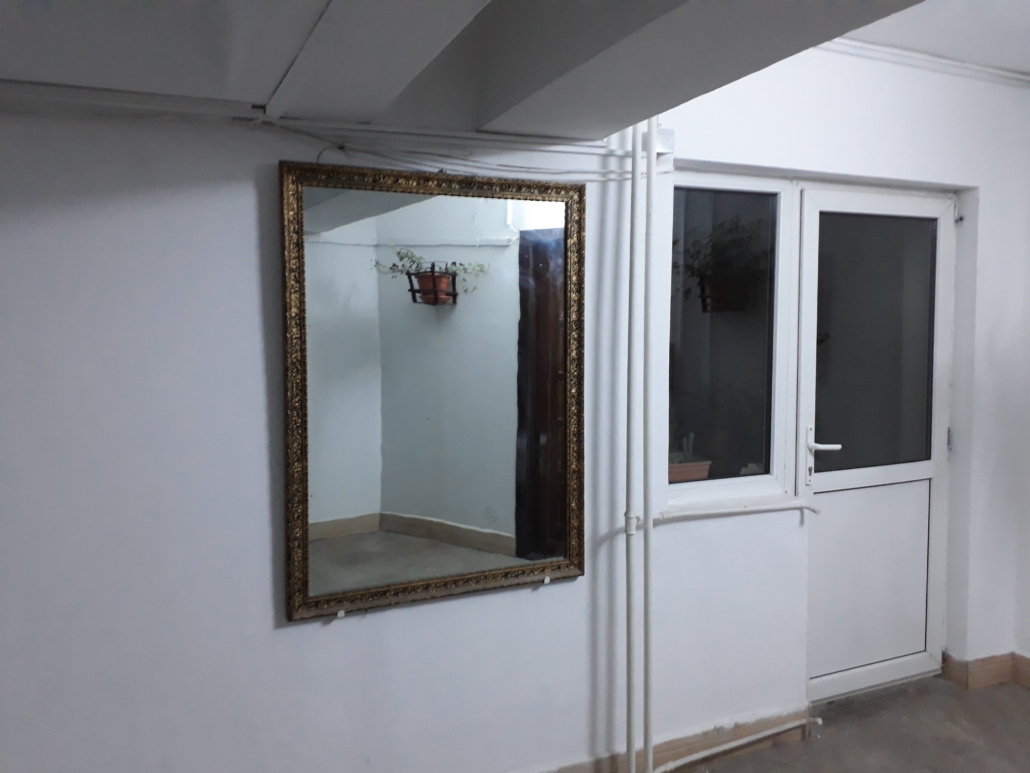 If not inhabited by the owners themselves, flats are often rented out fully furnished here. This is rather practical. The extent to which residents feel at home, though, is often influenced by landlords’ taste. A hallway, consciously furnished in the manner shown here, is new to me. The golden decorated frame stands in stark contrast to the functional, whitewashed walls in a somewhat run-down stairwell. Who put up the mirror? And what do people see in it when they find themselves in this somewhat surreal setting? 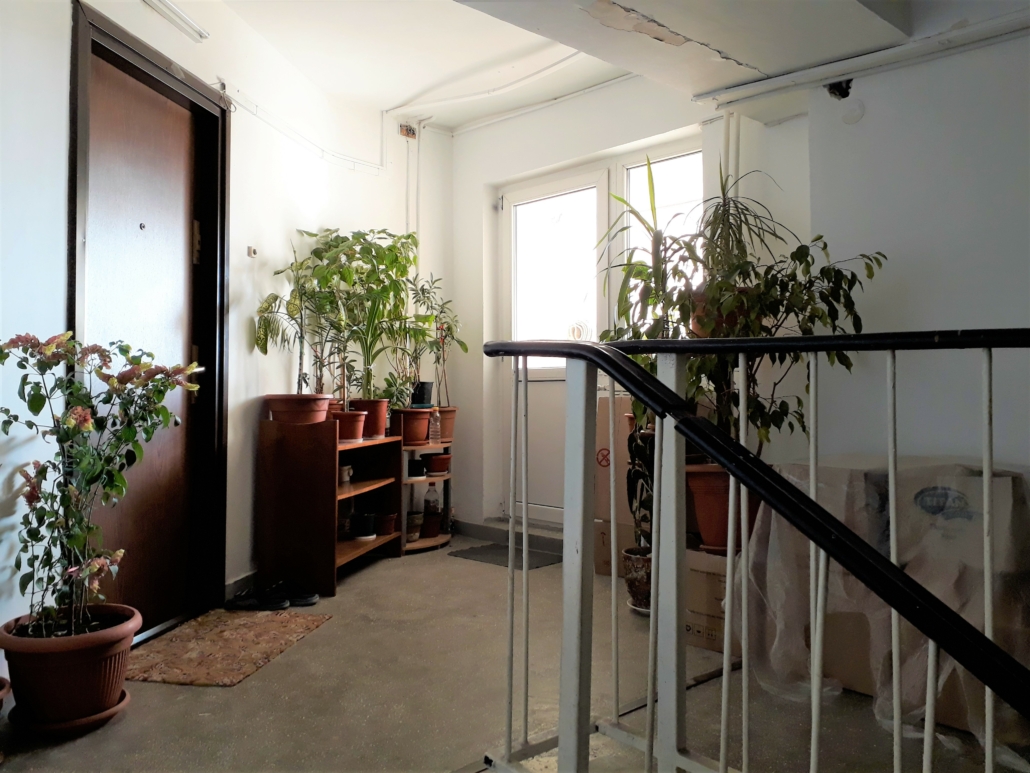 To make things nice is something that many, mainly elderly, female residents of the building aspire to. The plants therefore constitute a small, wilting welcoming committee outside the doors to individual flats. Some of the plants enjoy more devoted care than others. Many of residents moved from the countryside to the city in their youth, doing so out of a mixture of willingness and compulsion. For many of them, then, these plants form a final and ultimately fading reminder of life – and youth – spent in the villages. The residents were transplanted to the city and the plants become a symbol of their efforts to thrive and bloom in the city – whether they wanted to or not. 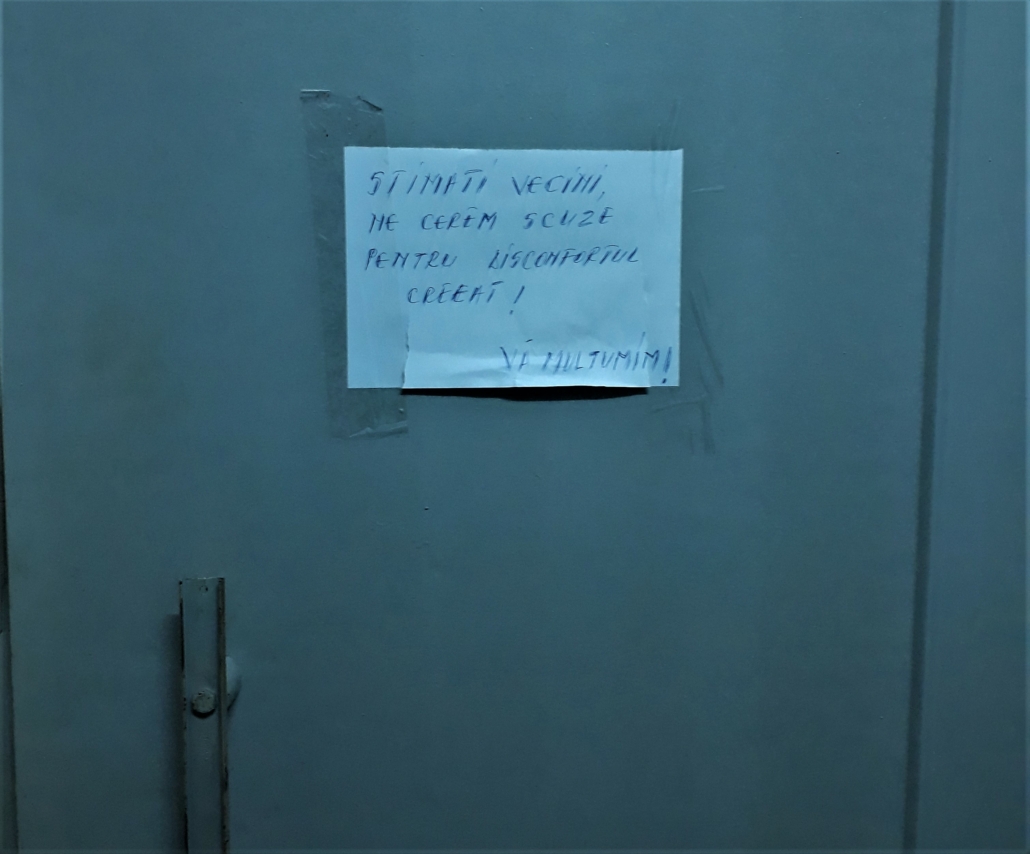 It rattles, it shakes, it creaks and occasionally it breaks down. But the journeys up and down definitely make life easier – and for some it remains a symbol of luxury. Sometimes it might be used to transport a dried out Christmas tree. Now and then, the elevator (known in Romanian as ascensor or lift) comes to a halt between floors. This stubborn mule of the community seems to lead an absurd life of its own. What inconvenience are the neighbours apologizing for here? No idea. But they appreciate everyone’s understanding – which is a basic condition of good neighbourly relations. Even if they, too, can be shaky, creaky or even break down sometimes. 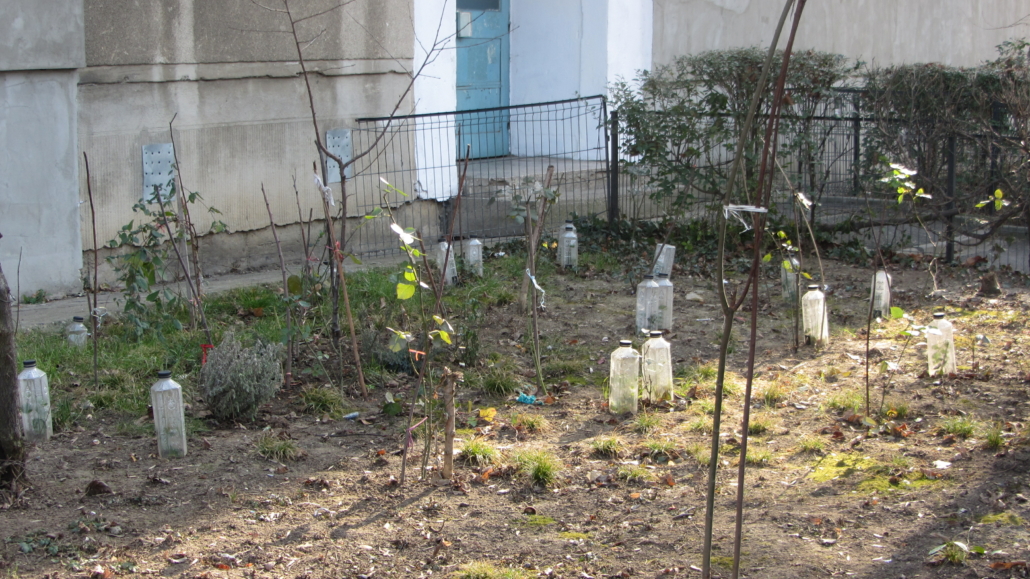 The art of improvisation has led to impromptu mini-greenhouses made of used plastic bottles springing up here. In Germany and elsewhere, this might be seen as a sign of dedicated gardeners practising guerrilla sustainability – but here it is rather a case of pragmatism using modern methods. The cuttings, though, are indifferent to the motives behind this act and are most likely covered in plastic again, awaiting the next snowfall. 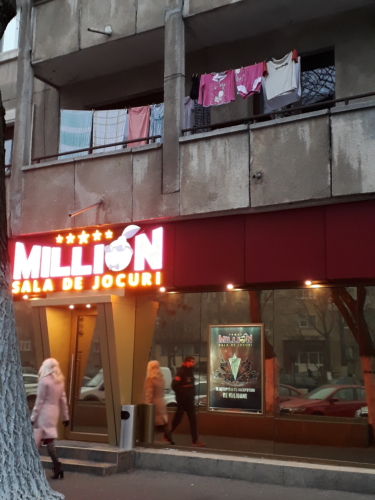 The Game of Life

Down below, someone is waiting to hit the jackpot. Up above, someone is waiting for the laundry to dry. The big prizes are a distant dream here – but that makes the glistening promise all the more interesting. The mirrored windows manifest that promise, while everything else seems almost banal – it is the stark juxtaposition, though, that is so telling.

All the photos presented here are snapshots, taken on the spur of the moment. These scenes were documented from an outsider’s perspective, capturing the localized normality that forms part of everyday life during winter months in a residential district of Bucharest. The impressions that I have captured form the space covered in my master’s thesis: a realm of post-socialist transformation that cannot yet leave the past behind yet must ask – what will tomorrow bring?

images and text (c) Jana Stöxen - the work may be cited according to academic standards. The text and images may be copied and redistributed for non-commercial, educational purposes, if permission is granted by the author. 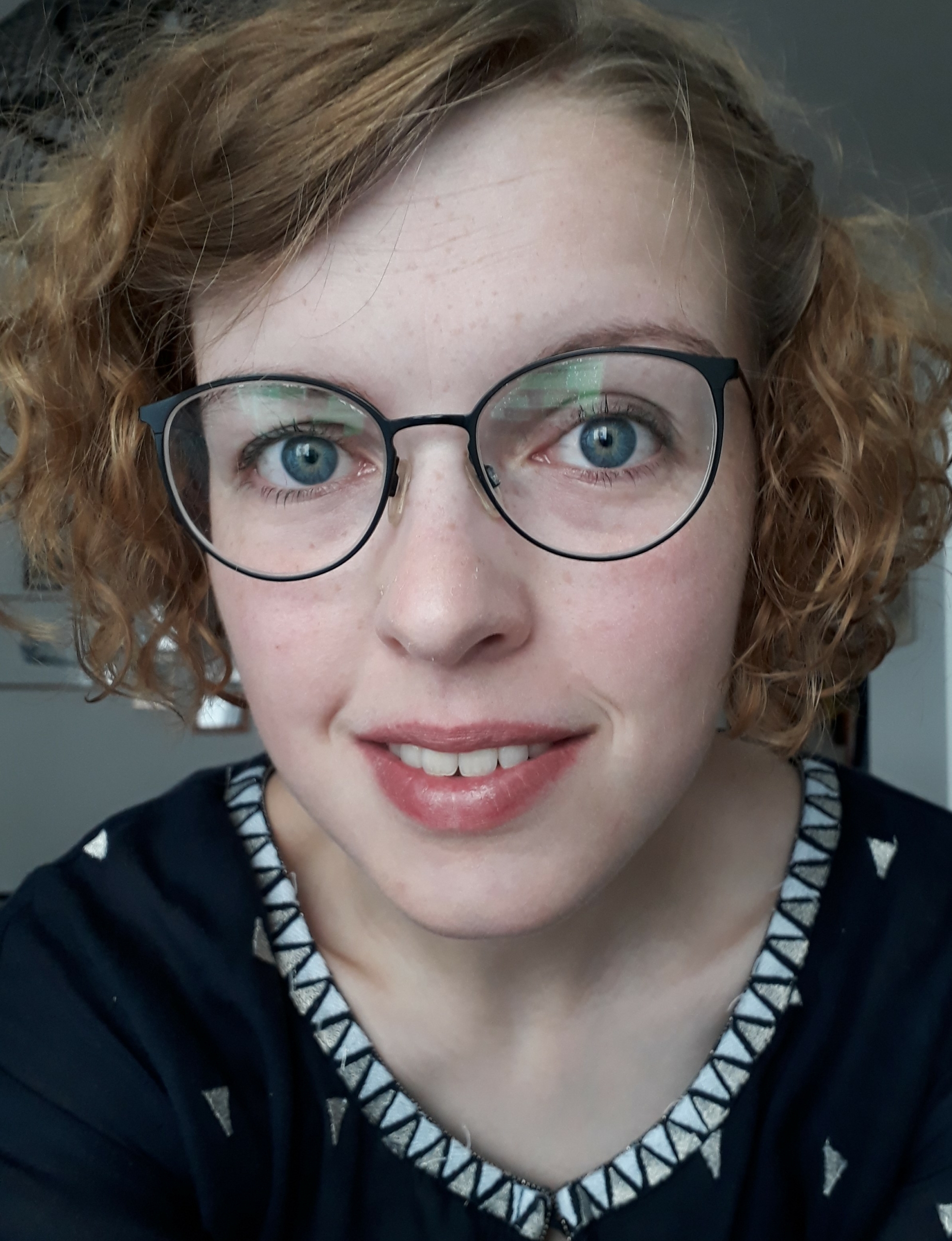