(c) Text - Kate Wroblewski. The work may be cited according to academic standards. This work may be copied and redistributed for non-commercial, educational purposes, if permission is granted by the author.
All images of artworks used are in the public domain.
Image Andrzej Duda (c) IMAGO / Eastnews

Silent Rebels and the Resurrection of the Polish Nation | Exhibition analysis

Kathleen Wroblewski, lecturer in history at U Michigan, Ann Arbor, and visiting fellow at the ScienceCampus in May 2022, offers insights into the recent exhibition Silent Rebels: Polish Symbolism Around 1900, which was held at Kunsthalle München. She explores the ways in which the show, part of the Law and Justice (PiS) government’s soft power agenda, features artworks that could undermine its efforts to promote a singular, martyrdom-focused politics of history and national identity. Instead, many of the works of Modern art, including the centerpiece juxtaposition of Jan Matejko’s and Leon Wyczółkowski’s two versions of the court jester Stańczyk – encourage ambiguous, potentially rebellious readings, critical of misguided political leadership.

Practical tip: Clicking on any link in the text to an artwork opens up a slider featuring all the pieces discussed here

Visitors who walk into the Kunsthalle München’s exhibition Stille Rebellen: Polnischer Symbolismus um 1900 (Silent Rebels: Polish Symbolism Around 1900/Cisi Buntownicy. Polski symbolism ok. 1900 r.) are greeted by a memorable figure. Reclining in his chair with a forlorn look on his face, Jan Matejko’s Stańczyk (1862) famously sits in silence as a party pulsates behind him. Matejko’s court jester, one of the most iconic images in Poland’s National Museum collection, has long been seen as a criticism of political shortsightedness and passivity—the stoic comedian who alone predicts the collapse of the Polish Crown and seemingly, given the context, the partitioned state, in what amounted to the repackaging of sixteenth-century myths for a nineteenth-century audience.

That nations rely on specific renderings of the past is not a controversial claim. By now, after decades of scholarship on nationalism, most historians see the nation as a construct, as created, invented, contingent, or “imagined,” as the obligatory reference to Benedict Anderson suggests.[1] At the same time, unpacking the workings of the nation while underscoring the limitations of the attention given to nations and nationalism have been paramount intellectual endeavors. At the same time, it is necessary to acknowledge the lasting organizational power of the nation-state and the allure of national identification.

Not surprisingly, perhaps, given the stakes, definitions of the nation continue to mark political territory, and the importance of understanding the workings of nationalism seems amplified given our current political moment and the rise of right-wing populism. Such is the case in Poland, where the Law and Justice Party (herein PiS, Prawo i Sprawiedliwość) has embraced a particular brand of populism that is part of a broader global trend but at the same time has its own local dynamics, including its own vision of the Polish past.

the Law and Justice Party (PiS) has embraced a particular brand of populism that is part of a broader global trend but at the same time has its own local dynamics, including its own vision of the Polish past

Historians and journalists have documented PiS’s interest in memory politics. From debates over school textbooks to the promotion of a highly selective vision of the so-called “Cursed Soldiers” that overlooks the underground units’ murdering of Jews, to its support for prosecution of scholars who explore questions of Polish complicity during the Holocaust, PiS has taken an active role on constructing a vision of a historical Poland rooted in polarities of valor and martyrdom. There is now a danger of personal liability for scholars who explore controversial topics, including importantly the complex history of antisemitism in Poland, even when they adhere to professional norms. But while PiS is a proponent of a unique narrative arc, it nonetheless relies on older nationalist renderings. 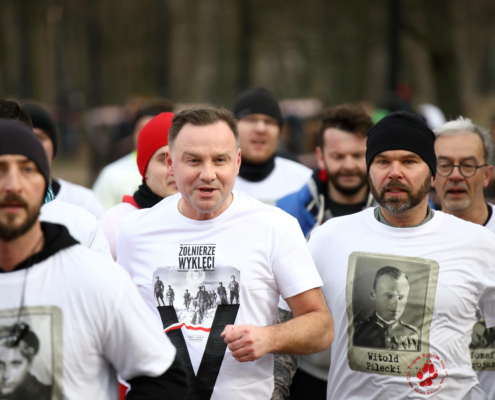 Cast in that light, the state-sponsored project of Silent Rebels is an odd fit. It certainly doesn’t tread on the same territory as heroic depictions of the Cursed Soldiers or the shutting down of open discussion of antisemitism in Poland, staying in the artistic and intellectual realm of the Young Poland movement. At the same time, however, the exhibition does political work, advertising a particular vision of the nation to international audiences and doing so in a way that normalizes that nationalist narrative and places it as part of the everyday—thus bolstering historical myths that help “Polishness” appear as a stable and uniform category.

Here we see the repurposing of familiar ideas. At its core, Silent Rebels presents the Polish nation as the primary vehicle of experience. Fights against partitioning powers, concerns about sovereignty and political stability, and representations of Polish Catholicism are at the interpretive forefront and elevated to the universal. Poland here is an established concept, and the discursive parameters for exploring wider or more dynamic forms of Polishness or of questioning the primacy of national categories are limited.

At the same time, crucially, there are pieces in the collection that don’t quite fit the discursive parameters of the nation, and here the curators do well to acknowledge the mismatch, even if that tension is often drowned out by the larger message. Does Ferdinand Ruszyc’s Nec Mergitur (1904-1905) present a galleon rocking in a magical storm, or is it an allegory of the Polish nation, forced to weather bombardments from outside powers? Does Stanisław Witkiewicz’s Foehn Wind (1895) display the beauty of the Tatras or does it symbolize political freedom and independence in the form of nature? Still, there are other works that are outliers entirely: Jacek Malczewski’s boy with the cloven feet in My Models (1897) or Witold Wojtkiewicz’s clown in Ploughing (1905) do not fit neatly or easily into a national narrative and are thus presented as the artist entering the realm of the magical and or as representative of a parody of peasant tropes. We could and should nonetheless push further to explore the political valences of the absurd and the grotesque, to question meanings of the nation entirely or to challenge the limitations of singular interpretations, which Ploughing, in all its farce, invites the viewer to do.

Like Matejko’s Stańczyk, Silent Rebels repackages the work of partitioned Poland for a new audience, with the end result a recognizable one—a Poland that always must the fight for its freedom and thus must continue to be on guard for external threats, a repackaging of the nineteenth century for the twenty-first, in true Stańczyk form. Temporality and scale are thus key to understanding the intellectual work of Silent Rebels, as the exhibition seems to collapse time, a blending of past, present, and future that Nicola Miller has argued is a core component of the workings of nationalism. “[O]ne of the strengths of nationalism,” she writes, “has been its capacity to offer a narrative arc spanning past, present, and future: it is at once synchronic and diachronic.”[2] It is this bending of temporality, of “constructions of the past and visions of the future,” as Miller puts it, that allows viewers to make the leap across centuries, imposing order on the inchoate and turning the fantastic into the rational.

Stille Rebellen presents the Polish nation as the primary vehicle of experience. Fights against partitioning powers, concerns about sovereignty and political stability, and representations of Polish Catholicism are at the interpretive forefront and elevated to the universal. [… But] if we continue to probe the relationship between the Polish expressionists and politics, we might find more ambiguity, more rebellion and less apolitical silence

For present political purposes, the challenge is nonetheless how to downplay importance of satire and the questioning of political leadership. It is here that a second Stańczyk (1898), exhibited next to the first, this one by Leon Wyczółkowski, arguably helps tell a story of futility rather than criticism of weak politicians, who are depicted by the artist as puppets. In the end, if we continue to probe the relationship between the Polish expressionists and politics, we might find more ambiguity, more rebellion and less apolitical silence.

(c) Text - Kate Wroblewski. The work may be cited according to academic standards. This work may be copied and redistributed for non-commercial, educational purposes, if permission is granted by the author.
All images of artworks used are in the public domain.
Image Andrzej Duda (c) IMAGO / Eastnews

Kate Wroblewski is lecturer and assistant director of undergraduate studies in history at the University of Michigan – Ann Arbor. She is a specialist in nineteenth and twentieth century world history, including transatlantic and global migration, as well as questions of citizenship and law. In Regensburg she will be working on developing her book manuscript, which examines the experiences of peasant labor migrants from partitioned Poland and the newly constituted Polish state as they moved to cities across Europe and the United States, as well as Brazil, in the late nineteenth and early twentieth centuries, and in particular how those individuals understood the changing labor conditions associated with capitalism. Rooted in interdisciplinary approaches to scholarship, this work incorporates social theory, the history of education, and religious studies, to consider how labor migrants fashioned themselves as self-sufficient and upwardly mobile individuals.